Elephant Dung and the Morning Sun

I have just completed my second round of checks and we have been getting some great leopard images, along with a ton of other great shots! Unfortunately, I have already lost three cameras to four-legged thieves. One of my stolen cameras was found yesterday still attached to its pole… halfway up a tree. When the poles are ripped out of the ground along with the cameras, elephants are usually the guilty ones. The fact that this one was up a tree tells me that some naughty elephant probably pulled the whole camera up and then just lofted it up in to the air with a fling of the trunk. Sadly, the camera did not survive its adventure, however, thanks to the SD card remaining intact, I was able to get the images off the camera. There is a close-up photo of a trunk and the next sequence is the camera on the ground. Then it ended up in the jaws of a lion, after that, no more photos. Using my mad Sherlock Holmes skills, I have decided that the camera was pulled out of the ground, pole and all by an ele (side tangent – it has recently come to my attention when talking to friends not in the animal world that the term ele (pronounced ‘ellie’) is not very commonly known when referring to elephants. However, ele is quite a common nickname in the sense of using rhino instead of rhinoceros in the wildlife and zoo fields, I guess it just not has made it out to the general public. Many of my non-wildlifer friends always have a puzzled expression when I say “ele,” so, I figured I would explain it to you, just in case you have never heard elephants called eles before – and now you know. Side tangent done), and then after the ele got bored with it, some lions came by and found this new toy on the ground and decided to play with it too. The camera did not survive being a big kitty chew toy, however it was still a temping javelin for an ele to try his skills to see how high up he could throw this plastic box and metal rod. And thus, my stolen camera ended up in a tree.

To counter my cameras being stolen by eles and other animals, I have started placing elephant dung around and on top of my cameras in “high risk” areas. This makes the cameras much less interesting since they just smell like ele poo now and not as much like me anymore.

Cross your fingers (or “holding thumbs” which is the South African version of fingers crossed) for me that this reduces cameras being thieved and chomped on.

Everything is going very smooth with this survey thus far. I did manage to scare the poop out of myself the other day though (man, this post is full of poop today). I was checking a camera station which had to cameras at a crossroads and they were decently far apart from each other. I collected both cameras, changed batteries and downloaded the images from them. I then walked over to the far camera and set that one back up. After, I walked back to the closer station to my bakkie to set that camera back up too. As I was fiddling with securing the camera onto its pole I looked down and saw fresh leopard tracks right in front of the camera pole. I did not remember seeing those tracks when I first grabbed the camera. My heart stopped as I thought of a leopard walking just here while my back was turned and I was crouched over setting up the other camera. After about 20 seconds of deciding I was about to die I decided to investigate a bit further and followed where the tracks crossed the road. My bakkie tyre treads went OVER the tracks so the leopard had been here before I arrived and I somehow just completely missed them when I initially took down the camera. And I live to see another day.

I know I have shared my joy of finding tracks with you before, but now I have some photos to go along. 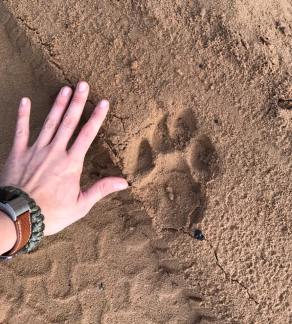 I love that this survey site is mostly sandy and after a rainstorm, the spoor in the freshly cleaned sand are phenomenal! They tell stories of a small pride of lions that walked through and one decided to waltz right up to one of my cameras for a selfie! (I can’t wait to see those images) Or of a genet that came to check out one camera then crossed the road to come check out the other camera as well, just to make sure they were the same thing. A huge giraffe walked right through the centre of my cameras a day or so ago. A porcupine walked through, but I don’t think he crossed the path of the camera, he stopped and gnawed on this monkey orange for a bit before giving up and continuing on his way. Driving down the road, I noticed a rhino used this road recently. I follow her tracks as she walked along the road, stopping every so often to leave a calling card for the next rhino to come by. Rhinos swipe their back feet as they defecate (and we are back to poop again), this helps to spread it around making a larger visible display along with helping to spread the odor as well. Ah, a miniature handprint here – perhaps a samango or a vervet has been by recently. This area is not known to have hyaena, however I found a trail of a lone spotted hyaena as he made his way past one of my cameras (look out for him in the images). I absolutely love all the tracks and their stories.

I put down the iPhone and pulled out my Canon for some photographs this week as well. I hope you enjoy them.

This past Sunday, the 24th of September, was Heritage Day, which is a public holiday in South Africa. Many different cultures make up the population of South Africa and on Heritage Day, everyone is encouraged to celebrate their cultures and traditions. To many this means getting together with your family and close friends and braaing, so Heritage Day is often referred to as “Braai Day” (remember a braai is a BBQ). We participated here at the research camp by having a nice braai of our own and making a potjie. A potjie is usually a stew-like mixture of meat and vegetables cooked in a three-legged cast iron pot over a fire. The flavours and ingredients vary depending on what the cook wants to throw in. It was all very delicious and everyone stationed at the camp had a wonderful evening. 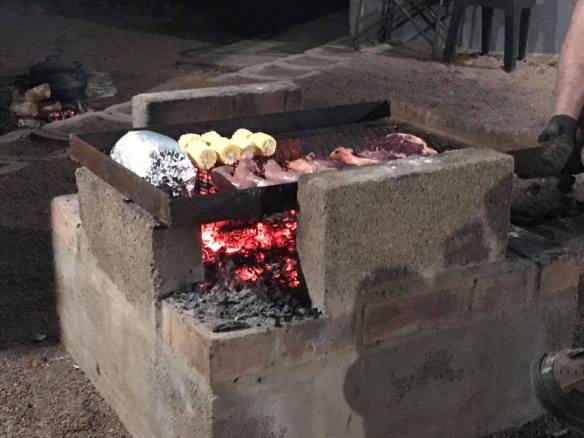