I arrived at my study site on Tuesday afternoon and immediately began organising my equipment and set out to check out some of my camera station sites. This place is absolutely beautiful and has such a unique landscape! There is a little research camp here where I am based out of. I have my own little ‘house’ which is a concrete building fitted with two single beds, a cabinet, working desk and ample space for my equiptment. At the research camp, there are also communal bathrooms, a shower room, kitchen and outdoor braai area. As far as field camps this one is set up quite comfortably! I share the communal areas with other researchers and volunteers.

Wednesday morning started bright and early. Another Panthera team member, Gareth, joined me to help with the initial set up. Right away we hit morning traffic. You know, the usual traffic when living in the bush in Southern Africa – a big ole’ bull elephant was taking his time utilising the convenience of having a nice road to walk down. You may have noticed that we set many of our camera stations up on roadways. This is not just for our convenience, many roadways here were made from old game trails. Also, for the animals it is easier walking down a (quiet) cleared pathway then trekking through the bush, and so they travel quite frequently on roadways and paths.

We did the only thing you can do when stuck in traffic – sit and wait. He was truly magnificent though, so neither of us minded. Throughout the day we had some more ele traffic along with a group of giraffes hanging out under the shade of a tree blocking the road (they moved off pretty quickly, but were quite interested in watching when we stopped to set up a camera station).

It was a HOT day, 43°C (that’s about 109°F), which is wayyyyyy different to the 16-20°C Cape Town weather that I have just came from. I think I might be skipping spring and going straight into summer here! We set up 20 camera stations, with two cameras per station. We set up two cameras facing each other to capture both sides of the animal as it passes through. This enables us to use the pelage patterns to identify individuals. The station locations are predetermined prior to the survey and we use the same locations year after year for data consistency.

You can see a camera on the left-hand side and if you look down the path you can see the other on the right side.

Thursday morning, we headed out to do our walk-in stations. While many of our stations are along roadways, some stations are also 1-6km into the bush. Since this area has some potentially very dangerous animals, we walk into these locations with an experienced ranger who knows this area very well. The walk-in stations are my favourite to set up; there is just something magical about walking through the bush. You don’t necessarily see more animals, since most are much more skittish seeing a weird two-legged animal as opposed to a vehicle which they see often and have gotten habituated to. However, you get to see the smaller details. We walked along a trail used the night prior by a pride of lions and followed their prints in the sand for quite a distance. We found a tiny little chameleon hanging on to a blade of grass, bones from a nyala that had been bleached pure white by the sun and quills dropped by a porcupine as he made his way down the game trail. My heart is always happiest when I am in the bush.

We finished setting up the survey (32 stations in total) that evening and it officially started at midnight. The survey will run for 45 days. Once a week I will visit each camera to change batteries, download the images from the week and replace any cameras that may have been damaged or stolen by animals. I then spend a few days at the research camp doing admin: going through the images from the week for priority species as well as checking for any unusual or suspicious activity. Along with some other Panthera work that I brought along with me. Once the survey completes and we take down all the stations, we upload the images and you all at CamCAT (www.cameracatalogue.org) help us to classify all the species! 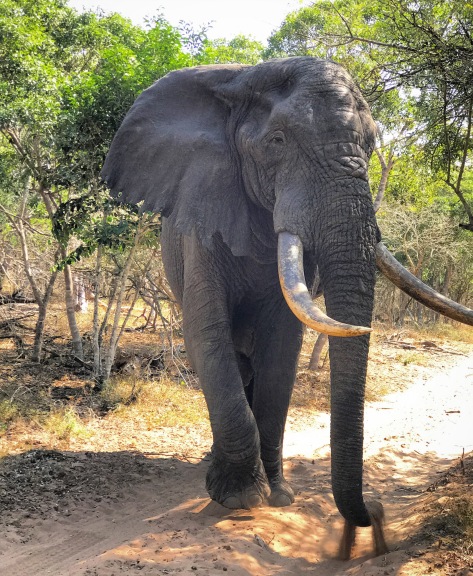 This guy walked right past the bakkie (truck), he is about 45 years old.

I do not have internet connection here, however at base camp I do have cell phone service, so I hope to be able to post a blog entry for you all every so often to keep you up-to-date with my field work, share photos and to share any fun stories that may happen along the way. Also, feel free to post any questions that you may have and I will respond to them when I can!