Another year old, another year wiser…. well, another year old for sure anyways. Today marks the day that I have been on this planet for 28 years. Man, I am getting old. 😛 My day started out early and I woke up before the sun to get out an about with my camera. It’s a cold and rainy day, so unfortunately there wasn’t too much out, but I did manage to see three cheetahs!! They were about 120m off in some tall grass so it wasn’t the best sighting, but it still counts! I really cannot complain one bit because I have had an incredible week of sightings so far! Besides the handsome big tom leopard the other day, I  have been able to check a big one off my photography goal list …………

LEOPARD CUBS!!! It was a super fast sighting, but I managed to get my camera out in time to catch a few in focus shots and many blurry shots of grass and spots. There was a game viewer that I was following on my way to some of the PantheraCams when they slammed on the breaks as a female leopard jumped up from her spot laying next to the road and dashed off into some thick trees and up a koppie. I tried to grab photo, but she was just too quick! I was still pretty excited to have seen a leopard and was happy with that when I noticed that the guests in the viewer were all still looking, pointing and snapping photos so I looked a bit harder. And there, bounding in the tall grass were two cubs! They also quickly dashed up the koppie after their mum, but I managed to catch them popping in and out of the rocks for a bit where I was able to snap this picture: 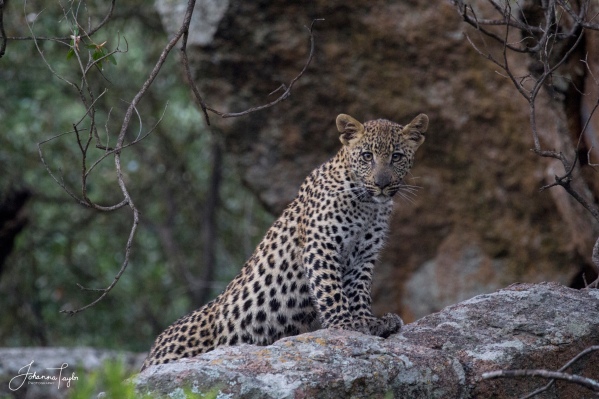 So sweet! They are about six months of age and I believe one is a male, but I did not get a good enough look at the other one. My first leopard cub sighting! Now of course I am going to be extra vigilant every time I pass this koppie, just in case they are hanging out again playing in the rocks.

AND just the other day I had an amazing cheetah sighting. This reserve is plagued with super cheeky animals and I have been struggling keeping my cameras upright as apparently, they make wonderful butt rubbing posts for rhinos and once they are on the ground the hyaenas snatch them right up! One of the reserve ecologists went out on a camera recovery mission with me to walk into the bush around the sites where I lost some cameras in hopes of finding them again (we only managed to find a pole at one site without a camera, the back only of a camera at one site and a completely smashed camera that looks like an ele stepped on it at another). Oh, the life of a PantheraCam!

While we were driving to the next lost camera site I made probably the most unique sound that I could never recreate and slammed on the breaks. Right next to the resting the in the shade of a tree were two cheetahs and just off in the distance was a third! They got up and walked down the road a bit (nice for us it was a management track so no game viewers or private cars could follow). We followed them and ended up hanging out with the trio for over an hour. It was a young group (1 year 8 months old) comprising of a brother and two sisters.

Very soon they will all split apart and go their separate ways. Female cheetahs live solitary lives and only come together with a male for breeding and then will raise her cubs until they are about 16-18 months old. Male brothers will sometimes stick together forming coalitions of usually two to three related males. These coalitions help allow them to patrol much larger territories that could encompass multiple female’s territories and also allows them to hunt bigger game by working as a unit. The males share everything, including mates. Females can have litters with each cub from a different sire (this is called heteropaternal superfecundation and is quite common in felids).

The sibling trio mainly did what cats do best in the heat of the day and rested under various shady spots. When a herd of zebra walked past snorting loudly to let the predators know that they have been spotted, the male slunk down in the shadows of a nearby tree and watched the zebra with interest. He made a half-hearted attempt at chasing one of the foals, but only succeeded in sending the herd galloping off into the distance. Defeated, he threw himself down into the shade and that is how we left him and his sisters. 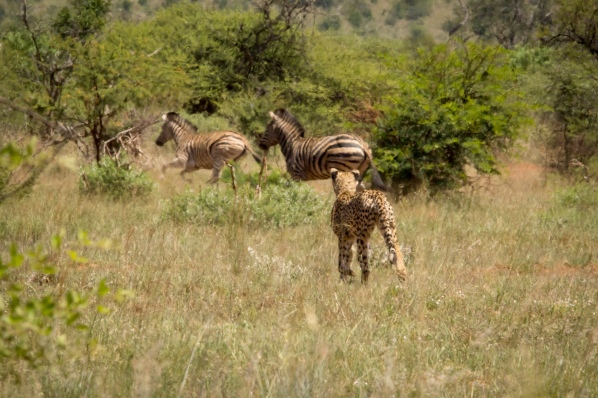 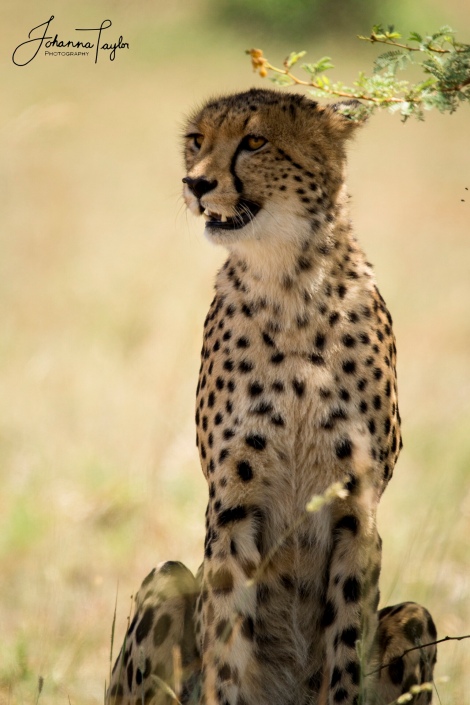 I have also had some Jurassic Park déjà vu moments from the “must go faster, must go faster” scene, but instead of being chased by miss T. rex, I was charged by a young bull elephant! Typically when a young bull comes your way you want to hold your ground or else you will train them that chasing cars is fun. Well, this boy was having NONE of that idea and started coming at me with a trumpet and in turbo gear. I had to reverse UP a steep hill on a road that was barely a road with tons of mini boulders and canyons in it. He chased me for nearly three minutes but eventually I got enough distance to turn the bakkie around and drive out of there. I think the cameras down that road will have to wait until another day to get checked.

And then the misty morning made for some wonderful Jurassic Park view moments complete with longnecks and triceratops.

I am not yet sure what the rest of my birthday day is going to involve. I do miss my friends and family a lot, especially on days like today, but I can tell you that I definitely do not mind spending my birthday here in the bush. (I just wish you all could come spend it here with me!)

← Out of the shadows, a mighty hunter
Big Cats: Predators Under Treat →