A total of 5,645 kilometres… That is 845 km more than the distance across the United States of America, 2,500 km further when travelling east to west across Australia, and 2,845 km more than the distance across South Africa. That distance does not even count all the little trips in between, including the time spent travelling to and from the various holding sites along the way.

Three countries and 5,645 km later it all comes down to this moment… The gate is pulled open and everyone holds their breath, waiting. Cell phones set to video mode are held out, GoPros and professional cameras held steady. All eyes are stationed on the impala leg that is positioned just outside of the gate of the holding boma (enclosure) – a lure, an offering, one last easy meal before the uncertainty of hunting in the wild. After what feels like an eternity, a flash of spotted gold races out of the gate and passes the free meal. He then stops, briefly assessing the situation and his newfound freedom. The large male doubles back and grabs the leg before disappearing into the bush.

Smiles break out throughout the group and everyone breathes a sigh of relief. It has been a long journey of 5,645 km and now the first wild cheetah in southern Malawi in over 90 years has left his footprints in the soil.

Moments later, the sound of branches snapping and a bushbuck races past us, barking loudly, with a spotted predator in pursuit. There is a new danger on the block. The cheetah gives up his half-hearted attempt on the bushbuck and heads back to the meat that does not require chasing. He eats a portion and then heads off past ancient baobabs to explore his new home in Majete Wildlife Reserve. 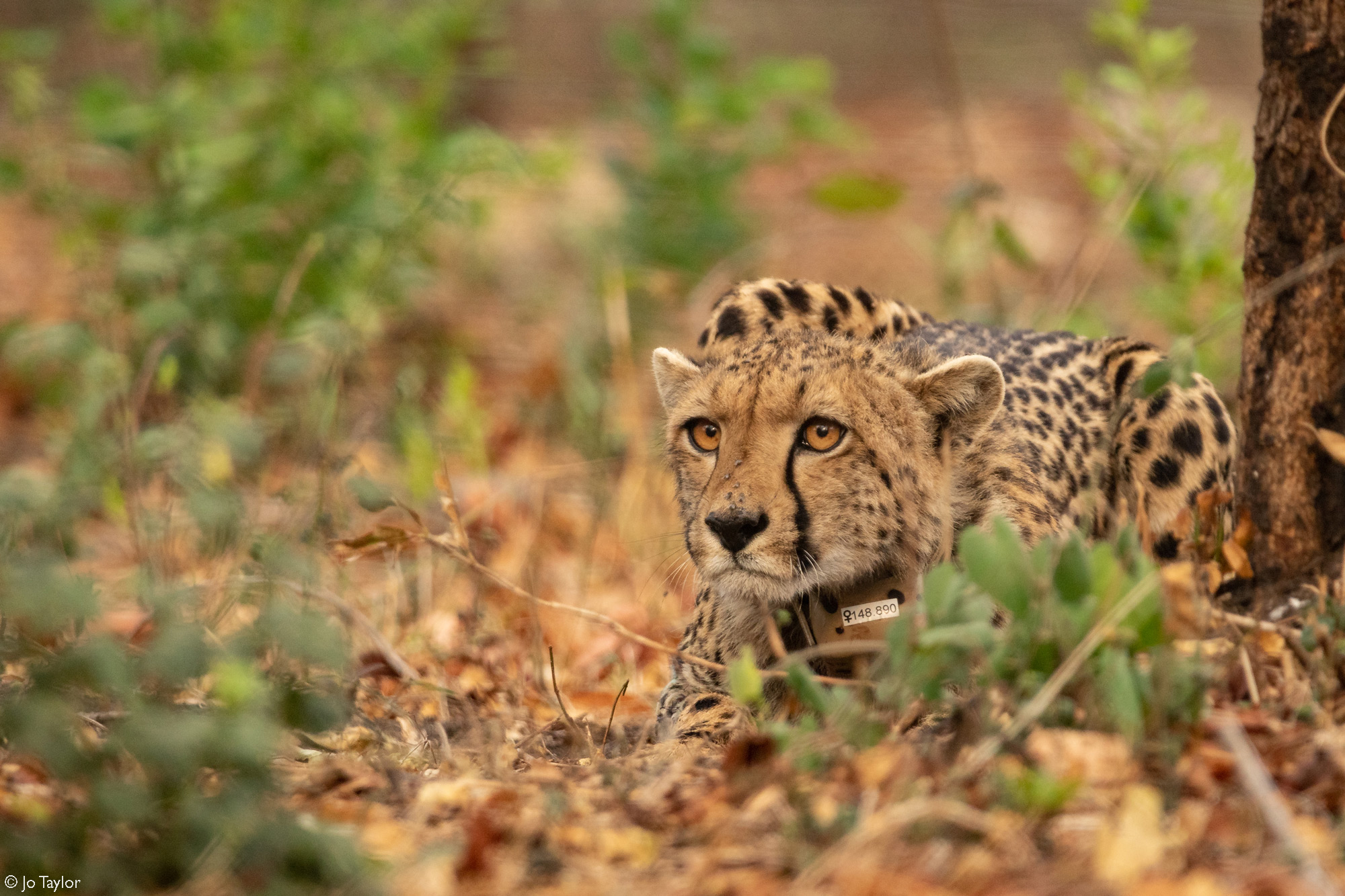 A female cheetah, named Samara, remains cautious and on alert after being released into a holding enclosure in Majete Wildlife Reserve in Malawi © Jo Taylor

In the beginning of the 20th Century, over 100,000 cheetahs roamed Africa and Asia, but by the end of that century, the wild cheetah population had reduced to 15,000. Currently, the total population is estimated at 7,100 adult and adolescent animals, with 4,297 living in Southern Africa, 2,290 in Eastern Africa and 457 in Western, Central, and Northern Africa. Cheetahs are listed as ‘Vulnerable’ by the IUCN Red List, and have been eradicated from 90 percent of their historical range in Africa, while in Malawi the entire population was extirpated in the 1980s after decades of habitat loss, human-wildlife conflict and poaching.

Now, in a bid to restore what once was, a collaboration between African Parks, the Malawian Department of National Parks and Wildlife (DNPW), and the Endangered Wildlife Trust (EWT) has allowed five carefully selected cheetahs to be successfully reintroduced into Malawi’s Majete Wildlife Reserve – with the hopes that this crucial founder population will help to grow the population range of this vulnerable big cat.

The cheetahs were donated by Welgevonden, Samara, Dinokeng and Madikwe game reserves in South Africa. Each individual was carefully selected via the EWT’s Cheetah Metapopulation Project, which creates safe spaces for cheetahs while managing populations across reserves to ensure genetic diversity. This reintroduction of five wild cheetahs, in conjunction with a successful reintroduction into Liwonde National Park in 2017, now increases the nation’s total population to 20 individuals. These translocation initiatives are critical for the preservation of the species – and they help to promote tourism, which generates vital funding for the parks and for local communities.

📷 Clockwise from top left: 1) Majete Wildlife Reserve rangers Nelio Stewart, Tizola Moyo and Dickson Kalikokha use telemetry to monitor and safeguard Majete’s black rhino population © Jo Taylor; 2) The Ford Wildlife Foundation bakkie (pickup truck), loaded up with the latest female cheetah, waits for all the paperwork to be checked over at the Mozambique border post © Jo Taylor; 3) Jo with rangers Dickson, Tizola and Nelio after a morning of tracking © Johan “Vossie” Vorster; 4) Jo using a high vantage point to lookout while monitoring the cheetahs © Johan “Vossie” Vorster; 5) Vincent chats with a little girl and her family at the Malawi border post as we wait for more paperwork to be checked before crossing © Jo Taylor

The most recent move of a female cheetah – named ‘Samara’ – to Majete was by vehicle in a bakkie (pickup truck). Vincent van der Merwe (EWT Cheetah Metapopulation Project manager and National Geographic Explorer), Johann “Vossie” Vorster (National Geographic filmmaker) and I crossed three international borders to relocate her from South Africa to Malawi. The cheetah was a trooper as her transport container bounced along poorly maintained roads, waiting at border posts for all the correct documents to be checked over by officials, and travelling day and night for over 55 hours. At the border posts, people would gather around to try and get a glimpse of what was in the wooden boxed labelled with African Parks and EWT stickers. Rumours of leopards and tigers were whispered amongst the crowds.

Travelling through Tete in Mozambique was the warmest part of the journey, but thanks to Vincent’s innovative thinking, we rigged up a system to deliver cool air conditioning from the bakkie directly into the cheetah’s container. This kept her from overheating during the hot portions of the trip.

Many cups of coffee, packets of pistachios and power bars later we made our way down the winding roads to Majete’s gate, where the cheetah was able to stretch her legs in the holding boma. Here she will remain for a few weeks as she acclimatizes to her new surroundings, as did the other cheetahs prior to their release into the wilds of Majete. We have high hopes for this female and for the four other cheetahs who have travelled such vast distances to make this reintroduction dream come true.

Read more about cheetahs here: The Cheetah, and continue reading below for information about Majete, African Parks and the Endangered Wildlife Trust.

📷 Clockwise from top left: 1) Preparing for the release of the two Welgevonden cheetah siblings © Jo Taylor; 2) Just before the big moment when the very first cheetah, from Madikwe, is released from the holding boma and into Majete’s wilderness © Jo Taylor; 3) Andrew, Jo and Vincent carry meat to feed the remaining cheetahs in the holding boma. The cheetahs were kept here for several weeks in order to acclimate to their new environment © Johan “Vossie” Vorster; 4) Vincent, Andrew and Jo take a breather after climbing to the highest point to search for signals on the telemetry set while tracking the cheetahs © Johan “Vossie” Vorster; 5) The male sibling from Welgevonden proves that he is more than capable of living as a wild cheetah in Malawi days after being released © Jo Taylor

When African Parks assumed responsibility of Malawi’s Majete Wildlife Reserve in 2003, the park was practically devoid of all wildlife, and the charcoal trade was driving the systematic removal of trees. Since then, Majete has become a case study for positive conservation development, with a pioneering rehabilitation and restocking programme that has set a precedent for similar projects across Africa. Today, Majete is flourishing, so much so that wildlife is being moved to populate other parks and private reserves within Malawi.

Within five years of African Parks taking responsibility for the reserve, over 2,000 animals had been reintroduced, including black rhinos in 2003; elephants in 2006; lions in 2012, and a host of other wildlife – making this budding reserve Malawi’s only Big 5 destination with now more than 12,200 animals thriving within its perimeter.

Park management has maintained a 15-year track record of zero poaching of rhinos and elephants since their introduction; and tourism has increased 14 percent from last year, with over 9,000 visitors (half of whom were Malawian nationals) – bringing in over US$550,000 to the reserve and communities.

Although Majete is open all year-round, the weather conditions vary according to the season. The wet season occurs from November to March, while the dry season runs from April to October. Temperatures range from 11 to 40 degrees Celsius, depending on the season. 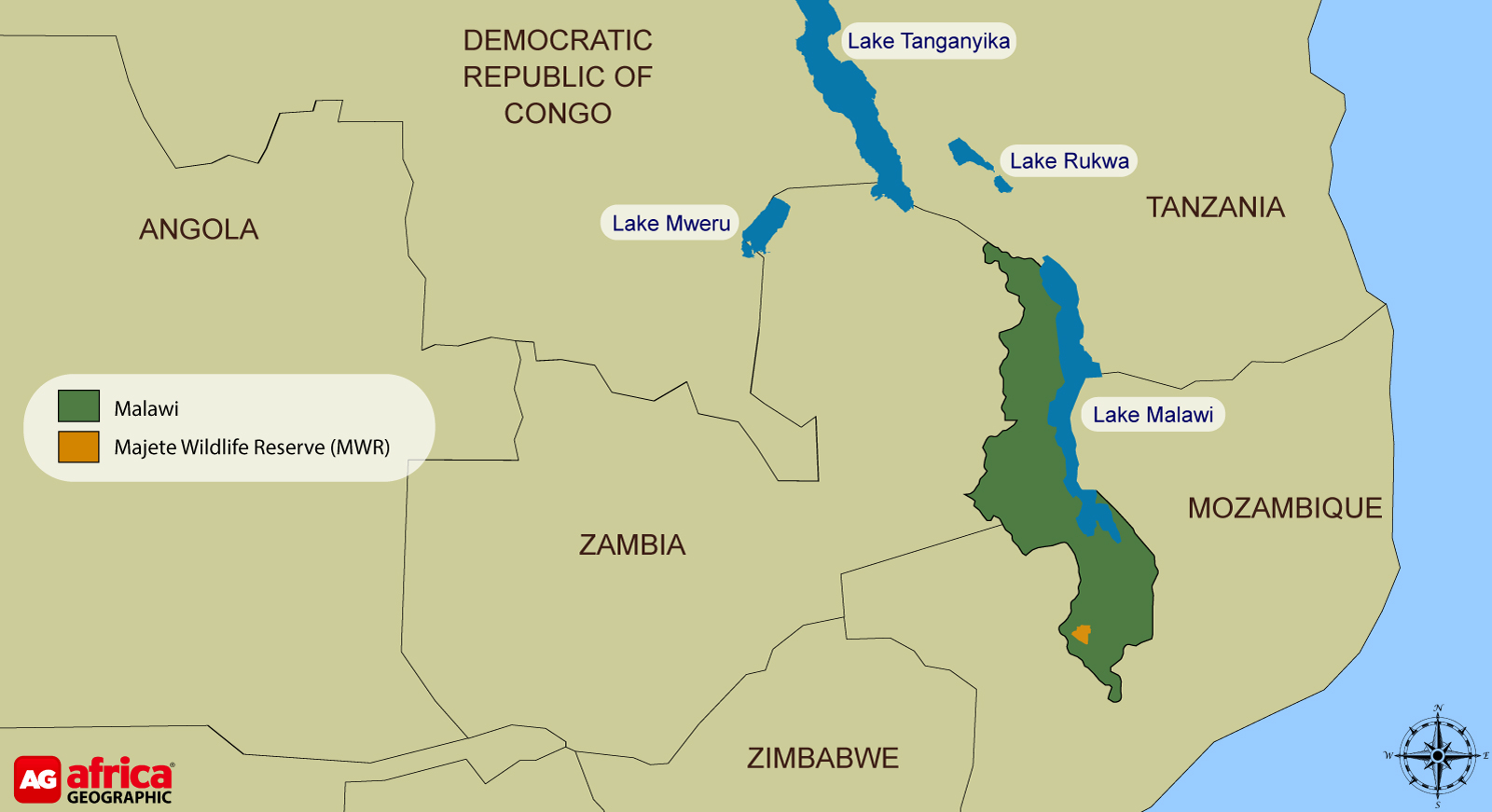 African Parks is a non-profit conservation organisation that takes on the complete responsibility for the rehabilitation and long-term management of national parks – in partnership with governments and local communities. Africa’s largest NGO (based on counter-poaching presence and area under protection), African Parks manages 15 national parks and protected areas in nine countries – covering over 10.5 million hectares in Benin, Central African Republic, Chad, the Democratic Republic of Congo, the Republic of Congo, Malawi, Mozambique, Rwanda and Zambia.

African Parks and Malawi’s Department of National Parks and Wildlife (DNPW) have been working closely together to rehabilitate habitat and restore biodiversity to the country’s parks since 2003, when a public-private partnership was formed for the management of Majete. African Parks subsequently assumed management of Liwonde (and Nkhotakota Wildlife Reserve) in partnership with DNPW in 2015, following the successful track record achieved in Majete.

The Endangered Wildlife Trust (EWT) has worked tirelessly for over 45 years to save wildlife and habitats, with its vision being a world in which both humans and wildlife prosper in harmony with nature. From the smallest frog, to the majestic rhino; from sweeping grasslands to arid drylands; from our shorelines to winding rivers: the EWT is working with you, to protect our world. The EWT’s team of field-based specialists is spread across southern and East Africa, where committed conservation action is needed the most.

Working with its partners, including businesses and governments, the EWT is at the forefront of conducting applied research, supporting community conservation and livelihoods, training and building capacity, addressing human wildlife conflict, monitoring threatened species and establishing safe spaces for wildlife range expansion. 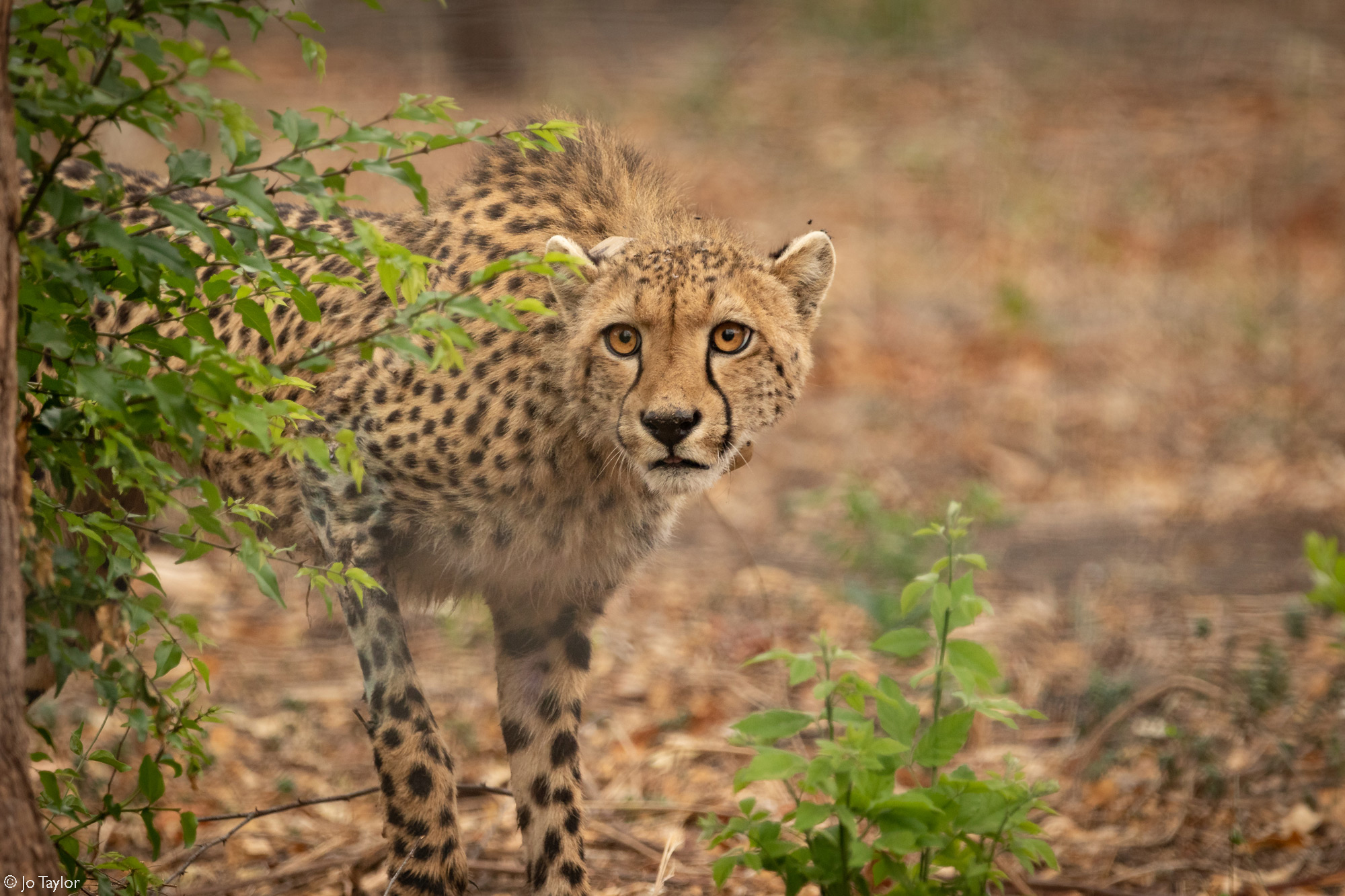