Why hello there, you. Thank you for stopping by my blog, and if you came here via an email notification because you are one of my millions (okay, maybe not millions – more like 27) of email followers, then a double thank you and a huge hug! And if you are not an email follower, but want to be one of the first to know when I do post a new blog, photos, videos, etc all you have to do is enter your email there on the right of this post under “Follow along on my adventures.”

And speaking of followers… I did something this week. With a bit of encouragement from Philip, I have joined the Twitter world! I now tweet (it is tweet right? Twit? Twat? Haha… ahem) from the field! I also post SUPER fun games such as “guess who destroyed my camera trap” and lots of cool animal selfies just prior to said camera trap being destroyed. So, if you are ahead of me on this whole Twitter game and are already on Twitter, you can follow me at @tigerbushcat – wait, do I type “at @” (hehe this just made me think of an AT-AT) or is just “@” sufficient? Ah man, I have so much to learn. I swear that I am a high-tech millennial. *cough*.

Why “TigerBushCat”? Good question – tiger bush cat is the direct translation of tierboskat which is the Afrikaans word for serval and if you have been keeping up, I kinda have a thing for servals. Not to mention (oh look I am doing it anyways), my MSc project is looking at serval densities and occupancy within South Africa. Cool.

This current survey seems to just have flown by! I feel like I have been saying that a lot lately… In less than two weeks I will be wrapping things up here and heading out to the next survey site – after a brief stop over in America. I think one of the reasons it has just flown by is that, unlike my survey site last year, I have been all over the place during this survey. I have had to make three trips to Joburg, a trip to another one of our sites early on to pick up a survey kit (remember the buffalo story?), and just last week my field assistant, Michelle, and I drove about 6 hours to another Panthera survey site to bring up a kit and help there with setup. This particular setup was a such a great experience and probably the most fun I have had on a setup so far! It was a site that I had never been to before and I really did not know what to expect. Unlike many of our survey sites which are on a single reserve or park, this one is a combination of multiple farms and properties spread across a mountain. You want to talk about views? Let’s talk about views…

Check out the view from my cottage at their research camp. I swear this is work and not holiday. But seriously, just look at that! I got to brush my teeth to that view for nearly a week. 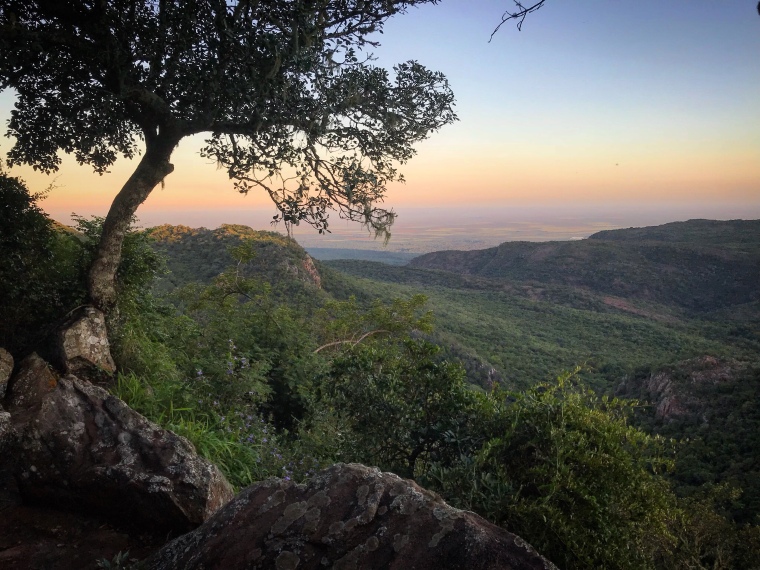 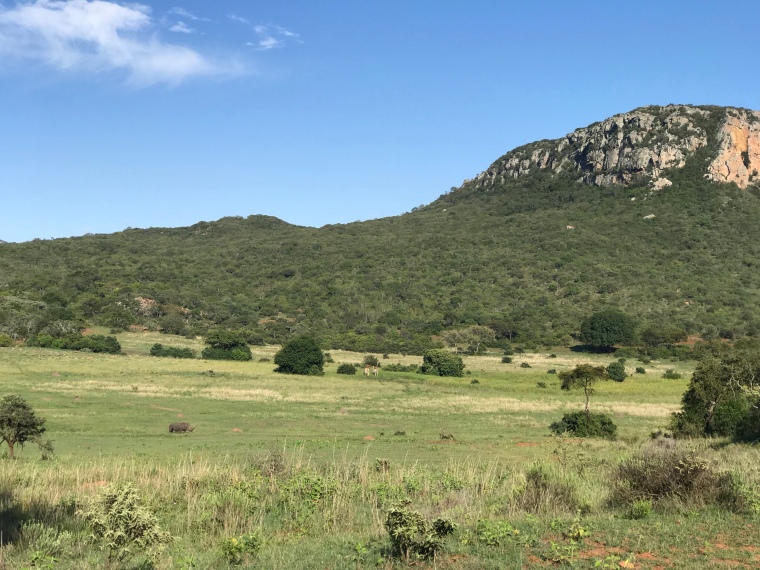 Philip Faure, the community engagement officer and carnivore research coordinator works with the landowners in that area and has helped to organise permissions for us to deploy camera traps on these private properties. The landscape of some of these farms was also very different than anything else I have experienced in South Africa thus far. Thankfully, Philip drove as we navigated nearly sheer rock faces and roads that I am pretty sure have not been driven on since last year’s survey – if ever.

When doing a setup at a site ran by that place’s ecology team or volunteers, I more or less bring the gear, help choose camera locations within the predetermined sites (ie. which game trails to cover, rhino middens to avoid, etc), and assist with physically placing and programming the cameras before heading off on my merry way back to my current site that I am running at the time. After that survey is completed, I then head back and pick up the collected data and gear. Setup can take anywhere from two days up to a week depending on how accessible the station sites are. Because this particular site required lots of driving to different properties and lots of opening and closing of gates, this one took us four days to setup.

Wild game on these farms is exactly that – wild. Because of this, sightings are much more fleeting than the sightings I have gotten accustomed to on reserves with animals that have become habituated to vehicles. But in a way, that almost makes them more special. While scoping out a new farm for the perfect location of two new camera stations, Philip pointed straight ahead and exclaimed, “that’s a leopard, bru!!” Yes. Bru. *shrugs* Of course neither Michelle nor I saw the supposed leopard, bru, that dashed across the road and into the bush. But not long after that, as we were making our way around a bend I had my turn to exclaim excitement (minus the bru) at seeing a leopard! This one was probably around a year old and what we would call a dependent (still relying on its mother). It was not nearly as quick to disappear as its mum (guessing on the first being mom, but it would make sense) and everyone in the bakkie had a quick glance. Too quick for a photo, so you will just have to take my word for it, but it was still remarkable to see a truly wild, non-fenced leopard. As I said previously, each leopard sighting is something special.

The rest of setup went great and in no time, Michelle and I were back on the road heading “home” to our survey site. I can tell you that I am definitely looking forward to going back for pickup and taking in those beautiful mountain views again. One of the greatest perks of my job is how much I get to travel and how fortunate I am to be able to see so many different parts of this incredible country. Another perk is getting to meet amazing fellow ecologists and conservationist and exchange knowledge, field stories as well as friendship.

Back to our usual weekly checks and we were blessed with another remarkable lion sighting (actually we have had two great ones just within this week). First thing in the morning and somehow there were no other vehicles or anyone else around, so we had the sighting all to ourselves = animal sighting perfection!

Check out this sunrise that morning too!

Just down the road part of the Central Pride of lions were making their way in search of their next meals. Four stunning male lions accompanied by two lionesses walked down the road directly towards my bakkie. I pulled over to the side of the road and snapped away on my camera as they made their way closer and closer.

The leading female, who was must have had a litter of cubs somewhere (you can tell by the lactation stains on her teats from suckling cubs), simply strolled past the bakkie as if we weren’t even there with her huge belly gently swaying back and forth with each step. She was followed by a younger female who paused a moment to rub at an itch on her nose before seeming to even notice us for the first time. She glanced up and down the bakkie before deciding we were not very interesting and, too, continued on her way.

Two of the males also strolled directly past us within such close proximity I could SMELL them. Anyone who has worked with lions in a zoo knows that smell quite well. For the rest of you, a lion smells like a musky and very dirty house cat who has been playing up in the attic all day with a pinch of that familiar cat urine smell and mixed with a touch of old meat that lingers on their breath. Lovely, hey? Smells aside (well, actually included since they just added to the experience), it was an incredible morning of camera checks. Have I mentioned how much I love my job? 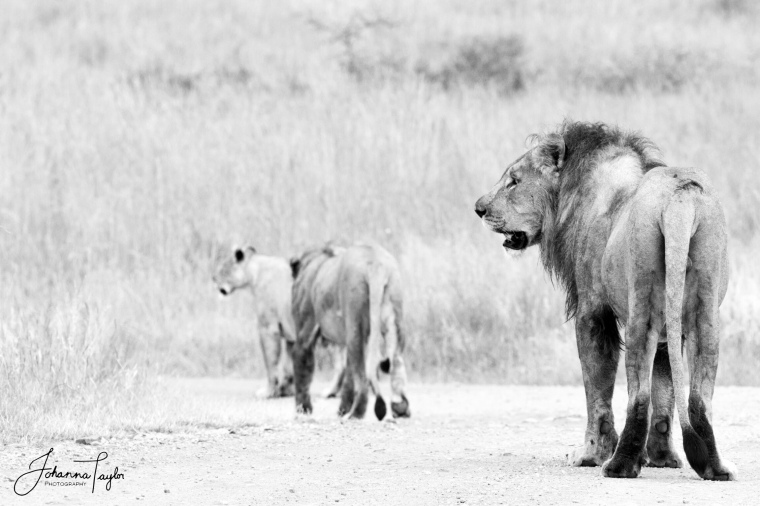 ← Big Cats: Predators Under Treat
Survey One of 2018: Complete →